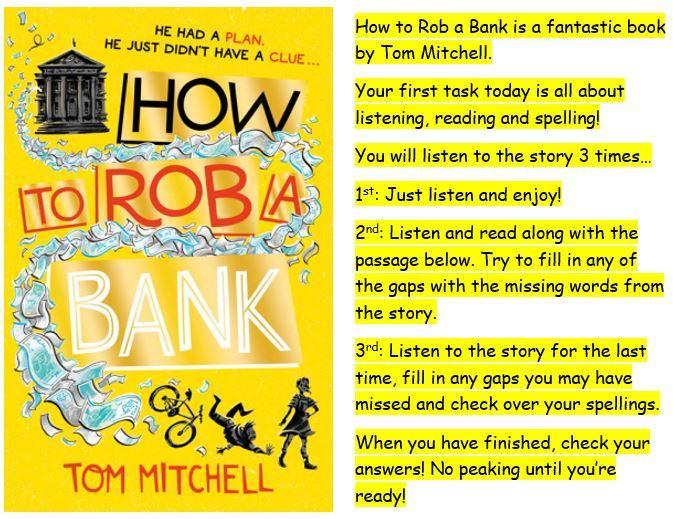 How to rob a bank.mp3

How to Rob a Bank – by Tom Mitchell

Ask yourself – do I need the money? Robbing a bank isn’t something to do to pass the time, like kicking footballs over the neighbour’s fence or reading. Some people rob banks because they’re greedy. Those people are usually caught after buying ___________cars or diamond-encrusted baseball caps. Others enjoy the adrenalin rush of thrusting sawn-off shotguns into the faces of middle-aged women. Those are typically twenty-somethings with ____________ childhoods.

It was an endless summer and I was fifteen and fed up with playing Call of Duty and FIFA. There are only so many times you can get sniped in the chin or spanked five-nil before you start ___________ the meaning of it all. Mum and Dad’s moaning meant I’d applied for part-time jobs. But even McDonald’s had turned me down. Dad said this was ___________ of Broken Britain. Mum said I shouldn’t stop trying.

It was a Saturday afternoon, one of those boring summer Saturdays without Premier League football and with lasagne planned for dinner. Dad was on the sofa, Mum was on the chocolate, and Rita was on the phone. And all my friends, apart from Beth, were on __________ holidays with never-ending beaches and azure oceans.

‘What do you know about Watergate and Richard Nixon?’ asked Dad. His question, like most of his questions, was a run up to _____________ me to watch a film. This time, it was All the President’s Men, which he’d first shown me when I was in primary school and I’d thought boring and confusing. I told him I was off to see a girl. That shut him up.

‘Good for you’, said Mum, who was at the dining table, holding a dog-eared magazine in one hand a chipped wine glass in the other.

‘Yes,’ said Dad, waving a hand to ______________ Mum. ‘Live a little.’ Dad was being ironic. It was something else he did – watching films and being ironic. That was Dad. Also – snoring. I went to my room, closed the door, and _____________ the smell of sweat that rose like shimmering heat waves from my stained duvet. I fell to my knees and ran my hands underneath the bed. My fingers passed over crisp packets and sticky patches that I’d worry about later. Finally, I found the package I’d been searching for. It had been hiding here since Monday when Brian, our seven-foot-tall German postman, had stood at our front door and had said:

To be honest, I wasn’t 100 per cent convinced a Nepalese scented candle would ____________ my friend Beth. But I’d cornered myself when Harry, a drippy guy in the year below, had asked what I’d got Beth for her birthday.

Beth lets Harry follow her around because their mums are members of the same yoga club or something. He thinks they’re best friends but they’re so not.

I didn’t even know she had a birthday. I mean, I know everyone has a birthday but…

‘A Nepalese scented candle,’ I said. ‘That’s what I got you.’

And I said this because only the day before, Dad had watched me order Mum a Nepalese scented candle of the internet. It was her birthday soon and he thought it would be good for me to get her something that smelt nice.

‘It sounds lame,’ said Harry. I didn’t take any notice of Harry because he said everything was lame.

So, days later, in my room, kneeling at my bed like I was praying to the god of smelly things you buy the women in your life, I thought, Yeah, Dad, I will take a risk. I’ll give Beth a Nepalese scented candle.

Even though her home was a baby version of the White House, it was ____________ massive compared to everyone else’s and especially mine. It even had its own cinema room, although the screen had yet to be installed. Her mum used the space to hang washing and it smelt of damp and regret.

I’d not told Dad about the cinema room. It might send him into a mood, whatever that means…