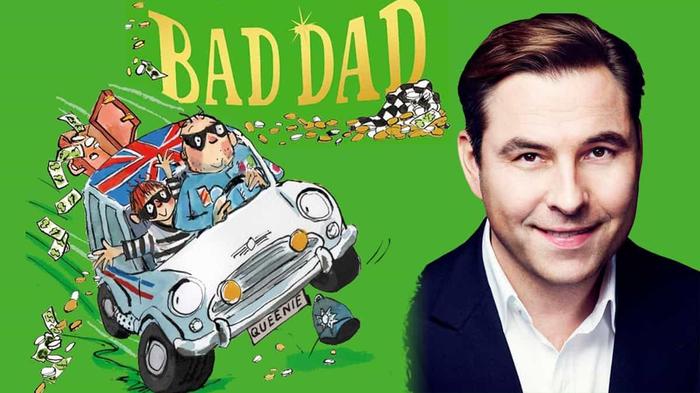 Listen to chapter one of David Walliam’s Bad Dad.

Pay close attention, and fill in the gaps as you go!

You can stop and pause it if you need to!

ROAR! went Dad’s car as it sped round the dirt track. Frank’s father was a banger racer. It was a _________ sport. Cars would smash into each other… BANG! …as they zoomed round and round. Dad raced an old Mini that he had souped up himself. He had painted a Union Jack on the car, and named her “Queenie” after a _______ he admired, Her Majesty the Queen. The car became as famous in racing circles as Dad. Queenie’s engine made an unmistakable sound like a lion. CRUNCH! ROAR!

Life was golden. Because Dad was a local ______, everyone wanted to know him. Whenever he took his son out for pie and mash, the owner of the shop would give them double helpings and then wouldn’t let them pay a penny. If Frank was walking down the street with his father, ________ in cars would beep their horns… BEEP! BEEP! …and smile and wave. The boy always felt a burst of pride whenever that happened. Frank even got marked up on a test by his Maths teacher after the man got a photo taken with his father at parents’ evening. No one was a bigger fan of Dad than his own son.

The boy worshipped his father. He was a hero to him. Frank longed to be just like his dad one day, a champion race-car driver. His dream was to one day drive Queenie. As you might expect, father and son looked alike. Both were short and round, with sticky-out ears. The boy looked like someone had put his dad into a shrinking machine. Of all the children at his school, Frank _______ he was never going to be the tallest or the handsomest or the strongest or the cleverest or the funniest. But he had seen the magic and wonder his father could create with his skill and courage on the racetrack. More than anything, he wanted to taste that. As for Dad, he forbade his son from watching him race. A night would start with twenty cars speeding round the track, and by the end there would be just one car still standing. Drivers often got badly injured in the and sometimes spectators did too if the cars crashed into the stands.

Give us a huggle* and go to sleep.” Dad would always plant a kiss on his son’s forehead before he went out to race for the night. As for Frank, he would close his eyes and __________ to be asleep. However, as soon as he heard the door close, he would creep out of bed and crawl down the hallway to the front door so as not to alert his mum. The woman would always shut herself in her bedroom and speak in hushed tones on the telephone whenever her husband was out of the house. Still dressed in his pyjamas, the boy would run all the way to the racetrack. Just outside the stadium was a huge tower of rustyold cars that had been smashed up in _________ races. Frank would climb to the top of the pile. There he had the best view of the race. The boy would sit cross-legged on the roof of the highest car, and watch all the bangers speed by. Every time his father’s Mini, Queenie, zoomed past, roaring as she went, the boy would cheer.

Dad had no idea his son was up there. The man barred his son from watching him race because he feared the worst might happen. One night it did.

This time, read through the extract of Bad Dad below.

Referring back to the text, answer the following questions:

a) Find three examples of onomatopoeia in the text.

b) What did Frank’s father call his car?

c) Find and copy a synonym for bravery on page 5.

d) Why do you think David Walliam’s writes some of the words in bold, larger font or italics?

The passage ends in suspense, “One night it did...”

We want you to work as predictors today.

Write the next paragraph of the story, imagining what happens to Frank after climbing to the top of the tower of cars!